The following information was obtained from the web-site of the Commonwealth War Graves Commission. The first table gives the bare details of George's military career and his place of burial

"I work in Sheffield Local Studies Library and came across your fabulous site while researching a local man who was executed for desertion in the First World War. He is not named in your list of Sheffielders but in the report mentioned on p44 of Shot at Dawn there is no indication that he was local apart from he was in the KOYLIs.

George Ernest Roe of the 2nd Bn, 3/1433 was shot on 11 June 1915 aged 19. This makes him the first, unless there are others yet to uncover. His next of kin was Mrs Mary Roe, mother of 24 Brough Street and I have found that although not named on the city's Role of Honour his name is listed on the one for the nearest parish church St Bartholomew's, off Langsett Road. This was put on at the time so it seems people were again unaware of true circumstances.

Hope this gives you further material for research, by far the best information I gathered on the subject and will be recommending it to our users".

George's family is listed as follows

An interesting discrepancy is the age of George. When he was executed he was clearly 21 years of age, but the information from the CWGC states that he was 19. Young soldiers did lie about their age in order to join the Army but this entailed adding years onto their age, not deducting them. It is also worth noting that he was in the regular army at the time of his death.

He was executed for desertion. His battalion - 2nd King's Own Yorkshire Light Infantry was heavily engaged in the spring of 1915 in what was known as the Second Battle of Ypres. More specifically their involvement was in the storming of Hill 60 which resulted in heavy fighting and high casualty rates. Was it the ferocity of the fighting that led to George deserting?

"Quiet Day ... Pvt Roe 2/KOYLI was shot for desertion by firing squad of Royal West Kents at 5am"

But what is even more macabre is that George was posthumously awarded a medal  - the 1914 Star - by the British government. His medal card shown below also mentions that George was "shot for desertion" 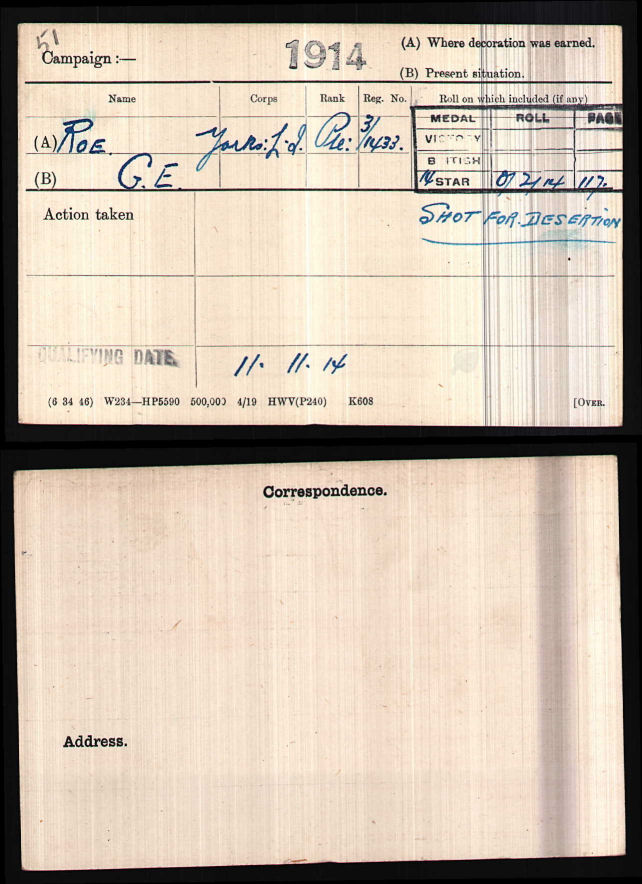 "I was searching the internet to help me with research into my Grandfather's service in the Great War when I came across your website. I have read 'Shot at Dawn', but I'd never realised that Sheffield men had been shot for desertion during the war.

I feel pretty sure that my Grandad would have known George Ernest Roe. He was also serving in the 2nd KOYLI during 1915. He died in 1967, when I was only 3, but my Mother used to tell a tale about a soldier who was late coming back from leave who was shot. Whether the details had got confused in the telling and remembering I don't know. Grandad was appalled by it all.

My Grandad, Ben Smith was a member of the 3rd Special Reserve Battalion before the war. His number was 3/1137. As George's was 3/1433 he will also have been a member of this Battalion. Apparently, men joined the Special Reserve for six months full time training at full pay. After that they trained a few times a year. They would be sent as reinforcements to the regular Battalions when war came. My Grandad joined the 2nd KOYLI in Belgium in November 1914. I'm sure George would have joined the Battalion about the same time.

Ben lived at Walkley before the war, so I am certain he would have known George.

What a terrible tragedy and injustice. Thanks for your work"

It seems as though the family continued to live at 24 Brough Street Sheffield after the war - I found these two records of school admissions - they are the sons of George's elder brother John William who is mentioned in the 1901 Census.

Did they know about their Uncle George?

3. Shot at Dawn - Julian Putkowski and Julian Sykes - The standard reference work about soldiers executed under the British Army Act in the First World War (1989).