There are a number of interesting aspects to the photograph. Apart from the total lack of traffic which has been commented on before, the other main feature is the amount of private housing in the area compared today. The ever expanding University and the growth in the health needs of the population has meant that many fine Georgian and Victorian properties were demolished  In addition there has been significant encroachment into the open spaces seen in the photograph. Most land and property that becomes available in this area is immediately acquired on behalf of either the University or the Health Authorities for development.

On a personal level the photograph also shows Spring Hill the road that I live on. In the top left hand corner there is a crescent shaped piece of land with a path across it. (This is now known as Harcourt Crescent) At the apex of the crescent is Crookesmoor Road and the large house facing the road is 8 Spring Hill which stands at its junction with Spring Hill. Incidentally a large part of the gardens which were part of 8 Spring Hill were developed a couple of years ago and are now covered with a large detached house (see above)

There is an earlier photograph that was taken from the tower (Firth Court - Western Bank) at the University in 1910. It direction is towards the City Centre and shows the skyline of the City. The most prominent building is St George's Church which is on the left of the photograph and now forms part of the University's Campus. In front of the Church  is Jessop's Hospital for Women. Most of the properties that figure in the photograph have been demolished. 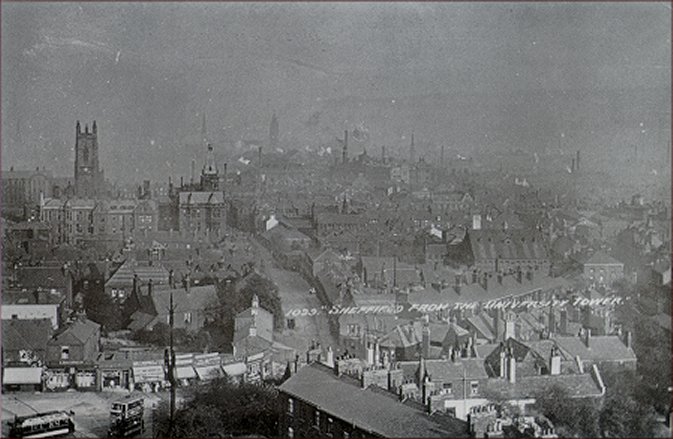 The photograph below shows the old Godfrey Dam, under what is now the Universitys synthetic pitches 1 & 2 on the north side of Northumberland Rd.

The Councils archive service pins the photograph down to 1920s and, by implication, pre-1924. It is very early for aerial photography. The photographic quality is not good enough to make out if theres water in the New Dam, under what are now the pitches next to the Goodwin sports centre and at the rear of Dam House. The aerial picture also shows the houses that used to stand on Winter St, Reliance Place, Western Bank, etc, but were demolished in the 1960s.

The 1903 OS revision (1903) just missed the completion (1905) of what is now Sheffield Universitys Firth Court, though not the urinal at the entrance to Weston Park or the cabmans shelter at the foot of Northumberland Rd

The following photograph was taken circa 1925 - 1930 and shows the main University building Firth Court on Western Bank. To the right of building are the Georgian Houses that were such a feature of the road at that time

There is also a photograph that was taken in the early to mid 1960's and appears on Dave Milner's Picture Archive of Sheffield (well worth visiting) It shows Western Bank prior to the expansion of the University. The fine Georgian houses that are below Firth Court look as though there are about to be demolished. Western Bank is now a dual carriageway that ends at the infamous Brook Hill roundabout.

Finally the other significant point is the absence of smoke pollution in the newer photographs.. Throughout the mid to late nineteenth and the first half of the twentieth century, Sheffield with it's strong industrial and manufacturing base, suffered greatly from the effects of smoke pollution. This can be plainly seen in the 1910 photograph. The turning point came with the passing of the Clean Air Act in 1956. This Act aimed to control domestic sources of smoke pollution by introducing smokeless zones. In these areas, smokeless fuels had to be burnt. The Clean Air Act focused on reducing smoke pollution, but the introduction of cleaner coals and the increased usage of electricity and gas actually helped to reduce sulphur dioxide levels at the same time. In addition, power generators were relocated to rural areas. As a consequence of the measures, air pollution in metropolitan areas was dramatically reduced. 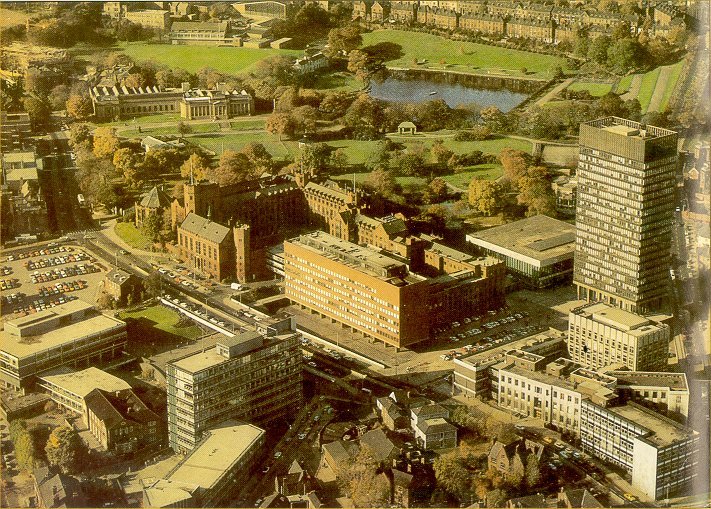 Return To The Local Index Page