Lewis was executed by hanging which can be defined as 'external compression of the neck by the weight of the suspension of an individual's head'. Hanging may occur with the body in the fully erect posture, with the feet clear of the floor, but this is not necessary - some individually hang themselves in the sitting or slumped position, where the suspension point is a door knob, or something at a similarly low level, rather than a tree branch or exposed beam etc.

In a contemporary  judicial hanging, the noose is wound round the neck in such a way, that the knot is either at the angle of the jaw or beneath the chin. Then the victim is made to fall through a trap door. The drop is usually about 8 to 10 feet, but this may be less or more depending on the weight of the victim. A lesser weight would call for a longer drop and vice-versa. The long drop and the peculiar position of the noose, breaks the joints of the neck and in the process the spinal cord in the region of the neck is crushed. Thus the victim meets an instantaneous death.

However even though Lewis was executed by judicial hanging it was not in the way as prescribed above. In fact hanging in eighteenth century Britain was a far more barbaric and demeaning experience. After receiving the death penalty there was a delay of a few weeks during which the prisoner was kept fully fettered in chains and apart from other prisoners. There was always the prospect of a pardon or commutation to transportation but the deplorable state of the judicial system made it very much a lottery. 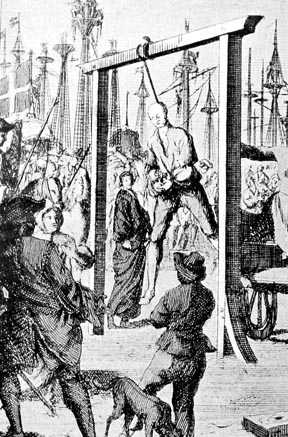 On the day of the execution the actual hanging was more or less akin to a lynching in the US. A stout wooden beam for the lack of a tree was erected in the local market place or some other convenient location and the prisoner was driven on the back of a cart  through the crowded streets from the jail to the place of execution. The vast crowds that attended these hangings did not like a dull execution but preferred it if the convicted person made a full confession and sought repentance or adopted a devil may care attitude. At the appointed time and after receiving the devotions of clergy the cart was drawn away and the person was left hanging. In the majority of these cases though death was not due to the severing of the vertebrae but by the sudden stoppage of the heart - the face of the victim appears very pale.

Hanging puts tremendous pressure around the neck. This causes the Carotid bodies to interpret ( although falsely ) that there is an abnormal rise in blood pressure. The pressure is in fact so great that the heart is not only slowed down, it is actually stopped. Thus the wisdom of the body turns into a folly! How do we know that the person did not die of shortness of breath, but of stoppage of heart? The tell-tale signs on the body of the deceased lead us to that. In cases of heart attack ( and any other cases of stoppage of heart), the face is usually pale, because the heart fails to supply blood properly to the various regions of the body. If the person were to die of asphyxia, the face would be congested i.e. the vessels in the region of the face would be full of blood. Because there is shortage of oxygen in the blood, the body compensates for it by sending more blood to all organs, and this accounts for the congestion of face. In cases of hanging quite a number of cases are seen where the face is pale, which tells us that the major cause of death in hanging is not asphyxia, but stoppage of heart. Nevertheless asphyxia does occur in a small number of cases of hanging, because we do see congested faces in a small number of cases of hanging. When it does occur, it may be thought that hanging obstructs the air passages at the level of the wind-pipe. This is certainly the level at which the ligature is found tightened. But this is not so. In fact the obstruction occurs at a much higher level- at the level of the tongue. The pressure of the rope in fact lifts up the base of the tongue against the soft palate. This causes the air-passages to get blocked at the level of the tongue itself.

1. ligature furrow on the neck coursing upwards towards the point of suspension. However this furrow may be absent if the ligature material is soft (eg a bed sheet), or where the deceased was cut down shortly after hanging him/herself, or where the body is decomposed. The furrow is usually above the level of the Adam's apple and becomes dried and parchmented after death.

2. congestion and petechiae of the head depend on the extent of body suspension - if the feet are off the ground the carotid arteries are likely to have been compressed, and the face is pale - if the body was fully supported on the ground, it is more likely that the jugular veins have been compressed but not the carotid arteries, and so the face would be intensely congested with many petechiae being present.

3.'stocking and glove' livor mortis distribution - if the body has been fully suspended/ hanging

4. bruising to the neck 'strap' muscles - immediately underlying the furrow (less likely with a 'soft' ligature)

5. fracture of the hyoid bone (this bone is the one in the neck which acts as a sling supporting the tongue, and is the highest structure in the larynx) - this is only really a possibility in those with osteoporotic bones, and is more commonly a feature of manual strangulation where there is more of a 'pincer-type' action involved.

In the Eighteenth Century the aftermath of an execution was decidedly gruesome. The usual fate was that after ascertaining that the person was dead the body was taken down, placed back into the cart and then taken to a medical facilility where the remains were dissected for the "benefit of medical science". But even this was an improvement on the traditional indignity that befell the body of an executed criminal. The body was taken down from the gallows and then taken to a location such as the scene of the crime or the local crossroads and hung in chains from a gibbet. The primary meaning of the word "gibbet" is simply a gallows. The steel frame to display the culprit's body is properly called a "gibbet iron." But there are references to displaying the body as "gibbeting" and soon the steel frame, itself, was also called "a gibbet."  It's a human form made of iron bands designed to hold the body of an executed criminal for the purpose of public display. The devise -- more or less -- held the rotting corpse together for several weeks or in some cases months